A strong new current of artistic expression swept through central Europe during the late 1760s and early 1770s, known as Sturm und Drang (storm and stress). While not every work was stormy or stressful, the moniker served notice that composers were turning away from the light, gentle, superficially pleasing world of the style galant (courtly style) to infuse their music with greater emotional depth and stronger subjective feelings. Sturm und Drang was evident in the relatively large number of works written in unusual keys (especially in the minor mode).

Another important new aspect of the Op. 20 quartets was the liberation of the cello part from servitude as a mere bass accompaniment, and the full participation of all four instruments as near-equals. It was probably sheer coincidence that an early edition of these quartets used as its frontpiece a drawing of a rising sun (hence, the nickname “Sun” Quartets), but the symbolism, accidental or otherwise, is obvious, signifying both the rise of a new musical style and the ascent of Haydn as a fully mature composer of string quartets. These works bear another nickname as well, Die grossen Quartette, which translates as either the great quartets or the large-scale, fully-formed quartets (in contrast to the slighter works that preceded them). Both designations are apt.

There are additional unusual features to be found in the Quartet Op. 20, No. 3. The division of the fiery main theme of the first movement into seven-bar phrases creates a most irregular pattern. The development section of this movement begins in the same key as the exposition (G minor), another exceptional procedure. The minuet movement continues the tone of tragedy and dark passion, possibly providing the model for Mozart in the analogous movement of his famous G minor symphony some years later. Following a slow movement of exceptional breadth and depth, a spirited sonata-form finale brings the G minor quartet to a close.

Millions of movie-goers have thrilled to the brash, swashbuckling themes, the sumptuously scored love music and the grandly heroic evocations of historical pageantry in Korngold’s film scores like The Adventures of Robin Hood, Anthony Adverse, Of Human Bondage, Kings Row, Captain Blood and The Sea Hawk and others. But late in life, Korngold returned to composing strictly classical music as he had done back in Vienna before his twelve-year stint in Hollywood. The third string quartet, composed in 1944-1945 while Korngold was living in Hollywood, was the first happy result of this decision. It was also the first concert work in which Korngold incorporated themes from his films, a move he made assuming that his film scores would soon be forgotten. (How wrong he was!). The first performance was given by the Roth Quartet in Los Angeles in 1946. The score is dedicated to Korngold’s friend, the great conductor Bruno Walter, also living in Hollywood at the time.

The first movement is laid out in traditional sonata form, with a flowing, twisting and highly chromatic opening theme followed a minute or two later by a more relaxed, lyrically expressive second theme dripping with nostalgia.

The Scherzo has the character of a grisly, macabre dance as might be enacted by wraiths or gnomes. By way of total contrast, the central Trio passage is warmly romantic, based on a theme from Korngold’s own favorite film score, Between Two Worlds.

Film romance appears in the slow movement as well. The main theme comes from the love music in The Sea Wolf, its gently rocking rhythm suggestive of the motion of ocean waters. Near the end, a descending three-note motif, heard a dozen times, might be heard as the haunting call of a siren.

The Finale is all energy, virtuosity and rambunctious behavior. The second theme comes from Korngold’s final film score, Deception, which was still unreleased at the time he wrote the quartet.

Schubert began his Quartet in D minor in early 1824. The previous year had brought him to the nadir of despair and frustration. Not least of the reasons for his depression was a prolonged stay in the hospital during which he came to the realization that his illness (most certainly syphilis, for which no cure then existed) was probably fatal and that he had not long left to live. The prevailing dark, somber and tragic mood of the D minor quartet reflects this despondent state of mind, and the composer’s gloomy thoughts on life and death, the past and the future. All four movements are in minor tonalities (in itself highly unusual), and there are just two extended passages where the music moves into the major mode (the fourth variation of the second movement and the Trio of the third).

The quartet takes its nickname, Death and the Maiden, from a song of the same title Schubert had set seven years earlier to a poem by Matthias Claudius. Schubert borrowed the song’s opening passage, slightly modified, to serve as the basis of a set of variations for the second movement. This passage represents the slow tread of Death as it approaches the girl. Curiously enough, Schubert’s score makes no mention of any subtitle; “the Death and the Maiden quartet” is an appellation assigned by later generations. The work was first performed in public in Vienna on February 1, 1826 at the residence of Josef Barth.

The work opens with music of great visceral impact, a full, chordal figure hurled forth with vehemence by the entire ensemble. The embedded triplet figure is destined to play a major role throughout the entire quartet.

The theme Schubert uses to construct the variations of the second movement is eminently suited to its purpose. Each of the five ensuing variations explores some aspect of this simple G minor subject, adding new layers of meaning, figuration and expressivity.

The Scherzo also derives from borrowed material, this time a re-working of one of Schubert’s German Dances from D. 790. Like the first movement, the music is bold in its gestures and often strikingly agitated.

The final movement is almost manic in its unflagging momentum and urgency. Again the triplet figure pervades the music, and is found as an element in each of the three themes. The music reaches almost unbearable levels of intensity, culminating in a veritable whirlwind of notes that brings the quartet to a sensational close. 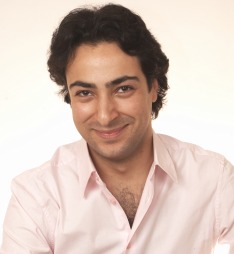 Thank you for taking time out of your busy schedule. Where are you today?

I’m in Hamburg right now, singing my first Verdi role in the opera “Don Carlos” at the Hamburgische Staatsoper.

When did you realize you wanted a career in music?

I was inspired at the age of 17 by my teacher and by classical music that I discovered. I always sang when I was a kid, but only in school and children’s productions, and I never thought at that time about becoming an opera singer. I guess it’s very rare to hear an 8 or 9 year old child say “I want to be an opera singer!”! I was lucky enough to study as an actor of musical theatre where I received voice, ballet, and acting coaching, and also some training in acrobatics. Honestly, at first I was disappointed because there was too much ballet, and we were dancing three times a week. I started thinking that I was maybe in the wrong place; not because I didn’t like ballet, but because ballet didn’t like me! One day I remember saying to my friend that I wish I could break a leg, and I ended up doing just that within two weeks (not on purpose of course) which enabled me to concentrate on my voice lessons. This gave me such joy and I discovered the depth and beauty of classical music.

Who are the great influences in your life and in your music?

My family, my friends. In music; composers, my colleagues…

How does your approach to singing and characterization differ when performing a recital versus performing in an opera?

When you sing a concert you are alone on the stage, you don’t have any costume for the character, no set design, no light design; basically you have to create an atmosphere for the piece on your own and make it believable and contagious. In an opera production it involves hundreds of people, everything works for the story, and everything helps you to create the right atmosphere. The Director helps to create the character of the role, the conductor – the musical character. Meanwhile in recital you have to do it by yourself. The singer is expected to sing with more colour, nuance and more detail in concert, especially when you sing with a piano. Sometimes the orchestra doesn’t give you this opportunity, and everything should be a little bigger. I think it helps your operatic roles a lot when you sing recitals, and visa versa for your recital experience after singing in opera productions. I like both disciplines!

What can you tell us about your Vancouver program?

It’s quite an eclectic program, combining different time periods from 17th-20th century, different languages and styles. It’s a pot-pourri: a little Russian music, of course, some ancient music, and it finishes with ‘Largo al factotum’, from Il barbieri di Siviglia. Figaro is one of my favourite roles, and it’s actually very hard to find a piece for lyric baritone that makes a good end to the programme. I’m also singing Poulenc’s comedic Chansons Gaillards, which is very rarely done, but it goes down well with the audience. It’s based on troubadours’ songs – young guys singing songs all about sex to the girls. The music is incredibly beautiful and serious, but the words are full of double entendres. I have to try to keep a straight face!

I usually try not to think about the result, and just try to enjoy the process and share with the audience the beauty of this music of such great composers, and to tell the story. It’s my hope that someone will find something in common with the stories being told.

What is the concert experience like for you, as the performer?

As an opera singer it’s good to do recitals. It allows you to be flexible with your technique. And sometimes you get tired of opera and you want some more intimacy with the audience. There is no decoration, no movement, no costume, no orchestra – you have to create characters on stage all by yourself. For me as an artist it is always important to find a contact with audience. I like this phrase: “You don’t step on stage to eat, you go there to be eaten”.

What influence does your Russian heritage and language have on your interpretations and choice of repertoire?

Of course it will be the primary influence in Tchaikovsky’s songs and in Onegin’s aria, with all the depth of Tchaikovsky’s music and Pushkin’s poem Eugene Onegin. And it gives me an in-depth understanding of the text.

You are much in demand, and no doubt you travel a lot and often alone. How do you manage to find a balance between the demands on your professional life and your personal life?

It’s not easy, but I try not to lose my personal life while pursuing my career. In the end the bigger the personal experiences in life, the more it influences you as an artist, so you have to grow in both directions, personally and professionally.

What are your concert highlights in 2012?

Musically, I’m most looking forward to singing the Antique arias, Barber, Poulenc, Tchaikovsky, Mozart, Rossini, Korngold and some Zarzuelas; which makes up the body of the majority of my recital work.

Thank you for participating in our interview. We are very much looking forward to hearing you in Vancouver on February 26, 2012.

Rodion Pogossov will perform with pianist Mikhail Senovalov at the Kay Meek Centre on Sunday, February 26, 2012.