It may be surprising to learn that while Brahms is universally revered as a giant of 19th-century instrumental music, he is often listed as one of the lesser composers of 19th-century art song. This may be because the texts he chose to set were for the most part not those of the great German poets. It may also be because he was loathe to indulge in the type of word-painting that Schubert had established so effectively as a major dramatic feature of the Lied (art song) genre.

But Brahms was strongly of the view that truly great poetry had no need of music, and so he chose lesser works that his musical ideas could more easily illuminate. His musical ideal in vocal music remained the simple German folk song with one general mood, subtly varied in response to the meaning of the text. A major role in creating that mood was the piano accompaniment, as illustrated in the songs chosen by Sir Simon.

In Nachtigallen schwingen (Nightingales beat their wings) the twitter and rustling of birds is picturesquely sounded out in the piano’s chattering triplets that create an animated aural backdrop to the singer’s identification with them as he walks through the forest.

Even more vivid is the piano’s depiction of the ebb and flow of waves breaking and foaming on the shore in Verzagen (Despair).

The piano conveys the tramp-tramp-tramping of footsteps over heathery terrain in Über die Heide (Over the heather) while its gentle drowsy pulse and saturated harmonies evoke the mood of Brahms’ famous lullaby in O kühler Wald (O cool forest).

An unusual and slightly eerie alternation between major and minor captures the ear immediately in the piano introduction to Nachtwandler (Sleepwalker). It almost sounds like a mistake, but conveys brilliantly the floating psychological state of the somnambulist.

A more playful interaction between piano and singer characterizes the last song in the set, Es schauen die Blumen (The flowers gaze), in which the piano plays the role of supportive sidekick, often echoing the vocal line back to the singer, as if to say: “Hear, hear. Well said.”

Francis Poulenc was absolutely besotted with the works of French poet Guillaume Apollinaire (1880-1918), originator of the terms cubism and surrealism. Apollinaire’s manner of constructing the fantastical ‘word salads’ of his poems finds its musical equivalent in the way that Poulenc composed these four settings of Apollinaire poems in 1931. Poulenc would compose isolated phrases individually, and then assemble them together as a kind of cubist collage.

The result is a kaleidoscopically colourful mix of sometimes comical non-sequiturs depicting with twinkling irony and dreamy nostalgia the somewhat louche demi-monde of society in which the composer thrived, and into which he threw himself with gay (in all senses) abandon. A pose of restrained elegance, however, keeps the aesthetic pose well this side of ‘camp’.

L’Aiguille (The eel) is a valse-musette that, in the composer’s words, “evokes the atmosphere of a shady hotel, with a rhythm inspired by little steps in felt shoes, and should be touching.”

Carte postale is dedicated to Madame Cole Porter and strikes a tone of amorous mockery.

The last two works in the collection, Avant le cinema and 1904, are patter songs that rely on the straight face of the singer for their wit to come across at just the right voltage.

In 1935 Poulenc was commissioned to write incidental music for Edouard Bourdet’s play La Reine Margot about Marguerite de Valois (1553-1615), wife of Henri de Navarre (1553-1601), later crowned Henri IV of France. To get the right period feel for his music, Poulenc plundered the Livre de danceries of 16th-century French composer Claude Gervaise, whose dances he rewrote in a modern neo-classical style for chamber orchestra, much as Stravinsky had done with the music of Pergolesi for the ballet Pulcinella. A piano version of this incidental music to La Reine Margot came out in the same year under the title Suite Française.

Like Stravinsky, Poulenc mostly kept the four-square phrasing, simple repetitive rhythms and modal harmonies of the original scores, creating variety by setting various sections for different choirs of instruments within the orchestra – a feature mimicked in the piano version. The modern sound of Poulenc’s score comes from his austerely sonorous, widely-spaced chord figurations, replete with 7ths and 9ths, as well as many acerbic ‘wrong-note’ harmonies.

The dances vary in mood, with the lively bransles, fanfare-like Petite marche militaire and celebratory Carillon alternating with the more serene and wistful Pavane, Complainte and Sicilienne.

Poulenc was a keen and enthusiastic observer of visual art. In the journal he kept on a visit to the United States he wrote enthusiastically about the paintings that captured his attention at the museums he visited. The idea of writing a song cycle about 20th-century painters that he admired first came to him after the publication in 1948 of Voir, an anthology of his friend Paul Eluard’s poems about the painters in his life. Eluard was also an art lover and an avid collector, who owned works by all the painters included in the song cycle that Poulenc eventually composed almost a decade later as settings of Eluard’s poems. Le Travail du peintre (The work of the painter) was commissioned by the American soprano Alice Esty, who gave the first performances of the song cycle in 1957 in Paris with the composer at the piano.

Poulenc’s settings are more a reaction to Eluard’s poems than a direct appreciation of the painters they set out musically to describe. Pablo Picasso is iron-willed, filled with invincible energy. The playful fantasy and dreamlike mischief of Marc Chagall is captured in what Poulenc called a “rambling scherzo.” Georges Braque is fondly remembered for his aquatints and etchings of birds in flight, imitated with the zesty chirping of bird sounds in the piano. The carefully composed cubist constructions of Juan Gris find their correlative in the balanced phrases of the song composed in his honour. Paul Klee receives short shrift in a quick song having little, it seems, with the painter’s actual work but inserted because of a need for contrast in the cycle as a whole.

The song devoted to Juan Miró seems fixated on that painter’s treatment of the sky. And finally, Jacques Villon, pseudonym of Gaston Duchamp (brother of the more famous Marcel) is memorialized in a litany of phrases that Poulenc sets with an even, regular pacing as a timeless contemplation of eternal human values.

Schubert is credited with single-handedly transforming the German Lied from its status as a form of home entertainment mostly cultivated by amateurs, and largely ignored by serious composers, into a worthy vehicle for artistic expression at the highest level. Not a bad item on your resumé if you were a mere teenager, as Schubert was when in 1815 at the age of 17 he composed his first epoch-making lieder, Erlkönig and Gretchen am Spinnrade.

What distinguished Schubert’s contributions to the genre was the way in which he brought the full range of musical resources – harmony, texture and declamatory style – to bear on the expression of the poetic text, as the selections on Mr. Keenlyside’s program amply demonstrate.

Using the Romantic literary trope of intimate communion with Nature, the lover in Ludwig Rellstab’s poem Liebesbotschaft (Message of Love) asks the burbling brook, ably represented by the cheerfully flowing figuration of the piano, to take his message of love downstream where his beloved lies daydreaming at the river’s edge.

Alinde is another song combing water imagery and the theme of love’s yearning. Its gently rocking barcarolle rhythm in 6/8 time represents both the lapping of waves at the water’s edge and the lover’s impatience as he waits for his beloved to arrive. An endearing, almost cutesy touch is provided by the small run-up ornaments in the piano.

Standchen (Serenade) is a song drawn from Shakespeare’s Cymbeline. In the scene in which it appears none-too-bright Cloten has crept into the bedroom of Imogen, who lies sleeping, to sing her this artless song with the hope that she will awake, arise, and make him happy in the way that only a young woman in nightclothes can. Cloten’s doltish overestimation of his chances in this regard is underlined by harmonies based on pedal tones and a naively upbeat rhythmic pattern in the piano.

Pity the budding epic poet in An die Leier (To the Lyre) whose musical sidekick, his lyre, has a mind of its own and will only let him sing love songs. Anxious calls to war are conveyed in clangorous dotted rhythms of diminished 7th chords out of which sweet dominant 7ths always seem to emerge to send the music in a more amorous direction.

In Nachtstück (Night Piece) an old man slowly walks into the forest at the close of day to commune with nature and consider his own approaching death. The opening introduction depicts his slow measured gait but more consoling music intervenes when he considers the rest that death will bring.

Similar thoughts on the impermanence of human life motivate An den Mond in einer Herbstnacht (To the Moon on an Autumn Night), a quasi-operatic solo aria, complete with recitative, bound together by a recurring ritornello in the piano. The constant presence of the moon shining down on the singer is evoked by the piano’s frequent echoing of the vocal line.

Herbstlied (Autumn Song) is Schubert’s tip of the hat to the lads and lasses who bring in the harvest. Folksong-like in the simplicity of its melody and its structuring in balanced phrases, it has an almost Handelian sense of quiet dignity and restful lyricism.

The last song in Sir Simon’s selection of Schubert songs is Abschied (Farewell) from the Schwanengesang song collection. This parting song is remarkable for its complete absence of melancholy. The singer is obviously leaving on his own terms and happy to do so. We can just see him, trotting away from town on horseback, the prancing hoof-steps of his mount picturesquely painted in the staccato articulations of the piano accompaniment. 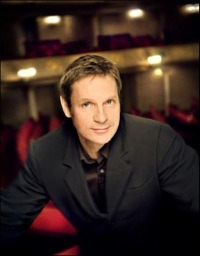 “I spend my entire working life dealing only with beauty; I rarely sing with a piece of music in front of me, so all of these beautiful songs are committed to memory.”

Performing opera does not come without its risks: injuring his back in one performance, Keenlyside was prevented from appearing in Chicago and San Francisco opera productions of Iphigénie en Tauride. An earlier injury was sustained when, as a young singer in Turandot, he fell of a ramp into a pit with a mask on, “smashing myself to pieces.” Keenlyside’s debut in Eugene Onegin was delayed after mangling his hand due to a fall through a trap door.

Keenlyside explains, “All singers get hurt. The backstage area is deadly, full of cables and sharp things. I’ve never hurt myself doing stunts. As you come out of the light into the wings, there’s the danger. But also, if you’re any sort of a stage animal, this is a contact sport. It happens to everyone. It’s a bit of a circus job.”

Bill Richardson interviews Keenlyside for Saturday Afternoon at the Opera.

Critical praise: The BBC Music Magazine has described Keenlyside as “the greatest lyric baritone of our time, indeed one of the greatest of any time. He submerges his personality in the roles he portrays, and does it with virtually unique insight and completeness. Everything is built, however, on superb breath control and a remarkable capacity for colouring the voice, combined with flawless legato, the principles underlying all great singing.”