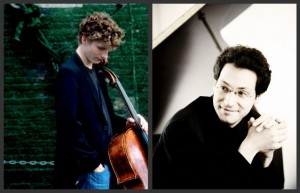 Few works of Claude Debussy (1862-1918) bear generic titles like symphony, quartet, concerto or sonata. Most have descriptive or evocative titles like Printemps, Jeux, Claire de lune, La mer, Nocturnes or Ibéria. Since chamber music tends, more than any other, to rely on the traditional forms of classical structure, it is scarcely surprising to learn that Debussy composed so little in this category. Most of the exceptions are found either in works of his student years or from the end of his life, when he looked more to Classical models and absolute music for his inspiration. Hence we find him in 1915 embarking on a project to compose six sonatas, each for a different combination of instruments. Only three were actually written, as Debussy’s health was rapidly declining. The first of these was the Cello Sonata. The second was for flute, viola and harp; the third (his last composition) for violin and piano.

On the title page of the original published edition appear the words “Claude Debussy, Musicien français,” no doubt a pointed indication that his sonatas were not going to be cast in the time-honoured mold of the German masters, but would follow a different path, one not characterized by standard exposition, development and recapitulation sections. It is more the classical spirit Debussy is invoking, not its organizational procedures. “The proportions and form of the Sonata were almost classical in the true sense of the word,” he wrote.

Except for the first three measures, the cello plays nearly continuously throughout the Prologue. Debussy took care to advise that “the piano must not fight the cello, but accompany it.” The principal theme is heard as a lyrical, descending line in the cello. This theme returns at the end of the Prologue after a middle section in which the piano momentarily assumes the principal role. Although the sonata is nominally in D minor, the flavour is strongly modal, perhaps in keeping with Debussy’s presumed intent that the sonata evoke the character of old Italian commedia dell’arte.

The two main movements are played without pause. The Sérénade throws out bizarre whorls of sound much in the manner of a moonstruck, crazed harlequin careening about the stage. Sarcasm, banter, and an air of the fantastique are created through the use of special effects for the cello including pizzicato, glissando, sur la touche (bowing over the fingerboard) and flautando (delicate, flute-like sounds).

The Finale, like the previous movements, leaves the cellist scarcely a moment’s rest, but the piano writing is far denser than in the Sérénade. Cello and piano engage in exuberant dialogue and reckless antics, pausing only for a moment of quiet reflection before resuming their drive to the finish.

The first performance of the Cello Sonata was given in the fall of 1915 by Joseph Salmon with the composer at the piano.

Beethoven wrote only five sonatas for cello and piano, but like the 32 sonatas for solo piano, they span most of his creative life. They were written in three spurts of activity: two (Op. 5) in 1796 at the very outset of his career; one (Op. 69) in 1808, squarely in the midst of his career; and two more (Op. 102) in 1815 when he was moving into what musicologists would call his Late Period. As with so many other works by Beethoven, his cello sonatas are of pioneering importance in form, content and the advancement of instrumental technique.

The two sonatas of Op. 102 were Beethoven’s principal works from the year 1815. They were written for Joseph Linke, cellist of the Schuppanzigh Quartet which had premiered many of Beethoven’s string quartets. These works are often regarded as the portals through which Beethoven entered his Late Period. The English scholar Martin Cooper notes that the sonatas of Op. 102 “show a combination of characteristics which do not appear in any earlier works of Beethoven’s with anything like the same consistency of concentration.” These characteristics include the prevalent interest in counterpoint, the use of trills and other ornamental devices as ends in themselves, syncopation, frequent and abrupt contrasts of pitch, bold harmonic progressions, and exploration into new realms of formal design.

The D-major sonata’s impulsive force and scope are announced in the opening bars, which feature a five-note figure that will pervade the entire first movement. Both principal themes reveal soaring lyricism, the first dramatic, the second more vocal in style. Only in the coda does the headlong rush of events subside.

The sublime, deeply introspective second movement is a long-breathed lamentation in D minor that exploits the cello’s most sonorous range. It is one of the most moving slow movements in all Beethoven, comparable to some of the utterances of the great final piano sonatas and string quartets. Its alternation of simple chordal writing and richly embroidered figuration also link it to the composer’s transcendental slow movements of his Late Period.

The Finale is no less astonishing. Here, for the first time, Beethoven incorporates a full-fledged, four-part fugue into an instrumental work, a practice he was to continue almost obsessively in his later works. It is announced in the cello, with the remaining three entries given to the piano. All the traditional fugal techniques are brought into play: statements and counterstatements, inversions, imitations, episodes and stretto. The fugue culminates in a flurry of scales and trills.

Kodály shares with Bartók the reputation for being one of the two greatest Hungarian composers of the twentieth century. Born just a year apart, they also shared during their lifetimes a deep common interest in music of their homeland, and conducted extensive scholarly research into music of the Hungarian gypsies and peasants in addition to that of surrounding countries. As such, they were among the first important ethnomusicologists. Into the sonata we hear today, Kodály poured the essence of his absorption with indigenous Hungarian folk music. To musicologist Harry Halbreich, “the cello seems to speak Hungarian.”

As Kodály had studied the cello as a youth, it is not surprising to learn that he wrote generously for this instrument. For cello and piano his catalogue includes, in addition to the work on this program, a Romance lyrique, a Sonatina and a Hungarian Rondo (originally with orchestra). For unaccompanied cello there is a capriccio and a sonata, and for violin and cello a Duo.

When Kodály began working on the sonata for cello and piano in 1909, he intended it to be a three-movement work in the classical tradition, but he never completed more than the two movements we have today. Many years later, shortly before the two movements were published in 1923, Kodály made a last attempt to write a first movement, but, as he stated near the end of his life, “By 1921 my style had changed so much that I was no longer capable of recapturing the spirit of 1909.” Cellist Jenö Kerpely and pianist Béla Bartók gave the first performance of the two movements on May 17, 1910.

A rhapsodic air prevails in the opening movement as it unfolds in a series of juxtaposed sectional divisions. The first sounds are for the cello alone, a rising motif that will prove to be a key structural element in both movements of the sonata. (Commentators like to note that it is the same motif that opens the slow movement of Brahms’s Double Concerto.) Its descending version is equally important.

In contrast to the darkly ruminative, moody Fantasia, the exuberant second movement is powerfully rhythmic and infused with the spirit of the dance. While most “unfinished” compositions lack endings (Schubert’s Eighth and Bruckner’s Ninth symphonies come to mind), Kodály’s Cello Sonata lacks a beginning. Yet, as in the case of the just-mentioned symphonies, the work seems complete despite its outward appearance as a torso. Kodály closes his sonata with a return to the opening of the Fantasia movement, now somewhat rewritten as if, with the passage of time, this material has now evolved into a new form. It makes for a most satisfying feeling of closure.

Johannes Brahms: Sonata for Cello and Piano no. 1 in E minor, Op. 38

Brahms’s choice of the cello as the piano’s partner for his first duo sonata is entirely appropriate in view of the composer’s predilection for warm, mellow, tenor-range instruments (clarinet and horn were also instruments he favored). Brahms wrote three movements in 1862, then put the work aside until 1865, when he wrote a finale. However, when the sonata was published in 1866, the composer suppressed the Adagio movement, leaving a sonata in three movements only.

Brahms dedicated the E-minor sonata to his friend Josef Gänsbacher, a cellist of modest talent. According to legend, on one occasion when Gänsbacher and Brahms were playing the sonata, Gänsbacher complained that the piano was drowning out the cello line, whereupon Brahms quipped “Lucky for you!”

Yet Gänsbacher was somewhat justified in his complaint, for there are unequivocally passages where the cello must struggle mightily to be heard above the thick textures and powerful sound of its partner. Balance problems aside, however, the opening movement is one of Brahms’s most impassioned statements, beginning with the gentle arch of the cello’s somber yet noble opening theme, passing to the robust second theme in B minor in which both instruments share equally, and to the radiant third theme in B major, heard first in the piano, then in the cello.

The second movement is entitled Allegretto quasi menuetto, but there is nothing “quasi” about this minuet. There is an almost antique charm to the courtly dance in Brahms’s treatment of it. Two pertinent observations about this movement are its absolute equality of cello and piano (Brahms even published the work as “Sonata for Piano with Cello,” not the other way around) and the delicate, introductory six-note motto that takes on an important role throughout the movement. It also becomes, in a different form, the basis of the flowing central Trio, where, in the words of Henry Cope Colles, Brahms “discards the primness [of the motto] and lets the little motif expand naturally into long, fluent phrases.”

The highly energetic finale takes its cue from Beethoven’s last cello sonata (heard earlier on this program) in its use of fugue in a duo sonata, but to an even greater extent, the movement is a tribute to Bach. The fugal subject strongly resembles that of Contrapunctus XIII from Bach’s Art of Fugue. To carry the Bach connection a step further, some listeners hear in the main theme of the first movement a resemblance to Contrapunctus III as well. But Brahms’s finale is not fugal throughout, for there are elements of sonata form as well, notably the use of a non-fugal second subject (yet derived from the fugue’s own countersubject!). Yet Brahms welds fugue and sonata form into a movement of structural integrity and sustained momentum. Even the concerto principle comes into play, with the two contending forces of cello and piano struggling mightily for supremacy as the sonata races to its tumultuous conclusion.