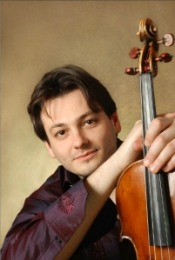 “If they say the violin is a human voice, I would say the viola is the voice of the soul.”

Discovery: “I studied at the boarding school, and there was a viola player in the next room. Its vibrations touched me deeply when I played it. That was how I realized that I can play this instrument.”

Repertoire: “[There is] a huge gap in the Romantic period. Since I’m a romantic character, I would miss this repertoire, and so I make all sorts of arrangements – for example, Tchaikovsky’s Rococo variations, which I arranged for viola and performed at the Proms in London; and there is an arrangement by Sitkovskaya of the Cello Concerto by Saint-Saëns, or [Cesar] Franck’s sonata, to name a few.”

On the highly competitive world of music: “Once you lose your quality, there are many young boys and girls who would gladly take your place. At the same time, I believe there is a place for everybody. If the player is good enough for an international scene, we don’t need to push each other in and out. A top-class, world maestro like Rostropovitch felt to his last day that he had to prove to everybody that he was No. 1. I think a musician cannot survive without an ego – yet, that said, I’m concerned that my ego should not become larger than the world itself.”

Pianist Boris Giltburg at the Vancouver Playhouse on Sunday, September 25 at 3pm.

“From start (Liszt) to finish (Prokofiev), Boris Giltburg’s recital brought to light an aspect of virtuosity neglected by many of his peers: the close relationship between art and technique.” Schwetzinger Zeitung. In addition to Prokofiev and Lizst, Mr. Giltburg performs music by Franck and Bartok.

After reading the above review, we are thrilled that Boris Giltburg has included Liszt and Prokofiev on his September 25 debut at the Vancouver Playhouse. In anticipation, we have included a video of Mr. Giltburg performing Liszt at the Artur Rubinstein Piano Competition.

In selecting Rysanov’s recording of Bach Suites as the CD of the week, The Sunday Times wrote: “…Rysanov really claims the music for his lush-tones and 1780 Guadagnini viola in a manner few can rival. No admirer of great viola playing should forgo the pleasures of Rysanov’s playing.”

Of course, we are equally thrilled that Maxim Rysanov has included Bach on his Kay Meek Centre program. Here is a film clip from his recording of the Bach Suites… for “the pleasures of Rysanov’s playing.”

Maxim Rysanov describes how he was introduced to the viola. It didn’t take long for this “prince among violists” to achieve success and acclaim. In September 2010 he performed Tchaikovsky’s Rococo Variations at the Last Night of the Proms with conductor Jiri Belohlavek and the BBC Symphony Orchestra.