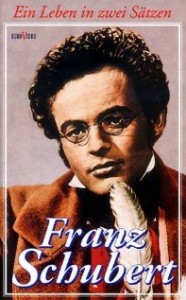 If Schubert is to appear in a graphic novel, it is not surprising to learn that he has made numerous appearances in film.

It would seem he first made his big screen appearance in the 1926 film Franz Schuberts letzte Liebe. More recently, his music was featured on the soundtracks of films such as The Sixth Sense, Good Will Hunting, The Curious Case of Benjamin Button and The Avengers.