A letter from Leila Getz

I returned last Monday from a trip to the Van Cliburn International Piano Competition in Fort Worth, Texas with a prize winner and a cold!

It has been twenty years since I’ve been to a Cliburn Competition and have decided that I’m not waiting another twenty years. The next competition is in four years and I am planning on staying young and vigorous so that I can return….possibly with a group of interested music lovers from Vancouver (but more about that later).

I knew right from my arrival at YVR that I was going to have a great time; simply because the woman two ahead of me in the lineup to go through US Immigration had a companion bulldog. The dog was dressed in a wetsuit (which was a little tight) and she had obviously given the dog some calming medication for the flight (as it was accompanying her in the cabin).  As you know, in these lineups you stand, you move a few steps, you stand, you move. Well, each time she stood still the dog collapsed in a heap and fell asleep and each time she moved she had to drag the poor thing up, so that it could take three steps forward and collapse again.

This dog put a smile on everyone’s faces, including US Immigration officers. Everyone was in such a good mood, that I am thinking seriously about taking my dog with me when I travel in future.

Checking in to the hotel in Fort Worth was my next little adventure. There was a woman standing ahead of me, and upon closer examination I decided that she was very interesting and worth getting to know. I loved the way she was dressed (short grey hair like mine) and really kinky glasses and earrings.  When she turned around I said “I want your glasses” and she said “oh, I’ll give you the name of the store in Seattle”.  It turned out that my new friend, Widbey, was from Portland, where she is on the Board of the Portland International Piano Series, and she had brought a group of 18 subscribers to the competition.

She had arranged all the travel, tickets, museum outings and everything. Before we parted company she promised to send me all her notes on how to go about planning a trip like this for a group, and she did so just as soon as she got home.  On the free day between the semi- finals and the finals I was lucky enough to join her group on a special curated tour of the 10- year -old Museum of Modern Art, designed by Tadeo Ando, which houses the most incredible collection. All the art is post 1945. The building is magnificent and the collection is a dream. The most impressive thing about the experience was that because the museum has the luxury of space the art is not crowded and it’s a very easy gallery to go through without feeling overwhelmed. Fort Worth is renowned for its wonderful art museums. There is also the fabulous Kimbell Museum which is just across the road from the Modern Art Museum. There are other museums in the neighbourhood as well.  Oh, would that we could do this in Vancouver.

My other lucky perk was that my hotel room at the Worthington was just two doors away from the Cliburn Hospitality Suite. So, apart from having fun with other Cliburn guests in the hospitality suite, I could carry as much food and drink as I could back to my room when I left!

Now to the important stuff!  First of all, it was wonderful to have the opportunity to hear the twelve semifinalists play two full recitals, a piano quintet of their choice with the Brentano Quartet, and two concerti with the Fort Worth Symphony under Leonard Slatkin, who was an amazingly sympathetic and fabulous conductor.  The level of piano playing was extraordinarily high. And at that level it’s simply a matter of which ones have the magic and which don’t.  Ultimately, it’s that indescribable quality that separates the true artists from the gifted. 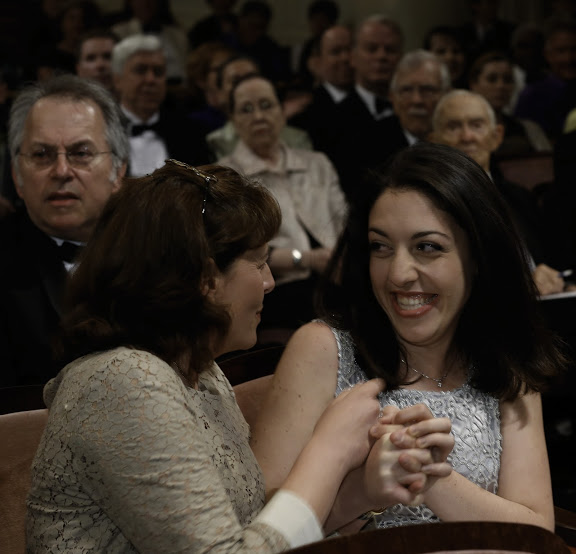 Beatrice Rana, right, 20, of Italy, reacts with her mother, Maria Solazzo, left, after winning the silver medal in the 14th Van Cliburn International Piano Competition at Bass Performance Hall in Fort Worth, Texas, USA on Sunday, June 9 2013. (Photo by Carolyn Cruz/ The Cliburn)

It was clear to me right from the semifinals that Beatrice Rana was going to be at the top. She may only be 20 years old, but she plays with such maturity and innate musicianship, and her sound at the piano can only be described as ravishing.  Her Chopin Preludes were heart-stopping.  So was her performance of the Prokofiev 2nd Piano Concerto.  Her power and her intensity come from somewhere deep within. And her smile lights up the room.  Then, there was a contestant who didn’t make it from the semi-finals to the finals ( many of us were most disappointed by that)…a young Australian, Jayson Gillham who I think will have a career in spite of not reaching the finals.  His performance of the Schumann Quintet with the Brentano Quartet was my favourite chamber music performance of all.  Aside from his talent, he has a wonderful stage manner. He bounds on to the stage with such joy and radiance. He sits beautifully at the keyboard and delivers.

Towards the end of the finals I am proud to say that I predicted the outcome correctly.  The Gold Medal Winner, Ukrainian pianist, Vadym Kholodenko, also possessed the magic I was looking for. In the final round he played an electrifying Prokofiev 3rd concerto, and in his final recital he played  Liszt’s Transcendental Etudes…. a performance which was breathtaking.   As many of you may know, I am not a Liszt fan and by the time it was over I felt like a battered woman….nonetheless, the audience (including me) was transfixed.

I had the privilege of meeting a number of the jury members. My particular thrill was meeting Arie Vardi, a legendary teacher who teaches in both Tel Aviv and Hanover. He is the Chairman of the Jury of the Artur Rubinstein Competition in Israel.  He was the teacher of Yefim Bronfman and a host of other marvelous young pianists who have appeared (and will appear in the future) on the VRS’ Next Generation Series. Mr. Vardi was very excited because Boris Giltburg, an ex – student of his, and a pianist who graced our stage in Vancouver a couple of years ago, had just won First Prize at the Queen Elisabeth Competition in Brussels.  Arie Vardi is currently Beatrice Rana’s teacher (her previous teacher was Benedetto Lupo whom you will also hear on our series next season).  I attended a Master Class given by Mr. Vardi and it was one of the great experiences of my life. What a knowledge and imagination he has. He must be an extraordinarily inspiring teacher.  He was extremely complimentary about the VRS, saying that we have one of the best series he’s seen anywhere and how extraordinary it is that we find these young artists before anyone else does.  I felt 10 feet tall.

At the helm of the Cliburn is Jacques Marquis who recently came from Montreal to take over in Texas. A French-Canadian accent really stands out in Texas!  The competition is extremely well run, with seminars, master-classes, free lunch-hour concerts, receptions. I believe there are 1,200 volunteers!

I had the privilege of participating in a panel on the development of young artists’ careers.  I met presenters whom I know from other parts of America and Canada, and some I didn’t know previously.

As I sat in the same seat right throughout the competition I made friends with audience members around me.  The gentleman sitting behind me in the hall criticized me one evening when I came in wearing the same earrings as the night before!  Needless to say, he didn’t get away with it.

Audiences connect people in wonderful ways.  It’s just not the same as sitting at home in your living room.  People from all backgrounds come together to share a common passion and the vibrations are palpable. Even if the parking is a hassle!  Go for live…it’s the best way!

And, wouldn’t it be nice to take a group of subscribers to the next Van Cliburn in 2017?

Shall we make a plan?

P.S.  Don’t miss BEATRICE RANA. She opens our Paul and Edwina Heller Next Generation Series at the Playhouse on Sunday, September 29 at 3pm.